How the instrumental music of Max Richter, Ólafur Arnalds and others became a big hit with young audiences 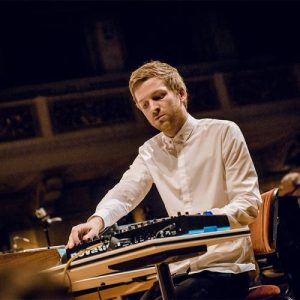 More than 5,000 people have filled the Royal Albert Hall for an evening concert of instrumental music. The thing that’s unusual for an instrumental concert at the grand old arena is that almost all of them are young: twentysomethings and thirtysomethings in T-shirts and jeans. They are here for Ólafur Arnalds, a 31-year-old Icelander who is, variously, a composer, performer and producer. Sometimes he makes techno music; sometimes he writes soundtrack scores. In the UK he is perhaps best known for writing the music for the television series Broadchurch, but tonight he is performing music for the self-playing piano system he calls Stratus, accompanied by strings and percussion. It’s all rather lovely: a wash of prettiness.

Arnalds is one of the superstars of contemporary instrumental music. He, his German sometime collaborator Nils Frahm and the British-German composer Max Richter can all fill big venues usually associated with pop concerts, but they are just the tip of the iceberg. The style of music that has been variously called neoclassical, new classical, indie classical and post-classical encompasses lush piano work, discordant orchestral composition, burbling electronics and numerous points in between. Its leading lights cross between concert halls, clubs and rock festivals. Some have had conservatoire training, some have worked it out for themselves. Artists such as Mica Levi, Anna Meredith, Hauschka and Nico Muhly cross boundaries and genres at will.

For Arnalds, the incentive to start writing came from the moving image. “I was trying to make music for films that were in my head,” he says. “Or sometimes I would watch films and mute the soundtrack and make my own score for it.” When he began composing, Arnalds thought he was on his own. “When I was doing my first record the only people I knew of were another generation: Arvo Pärt and some film composers . . . Clint Mansell did film music but he didn’t come from a classical perspective. He was using strings, he was using piano, but he had been in an electric rock band before [Pop Will Eat Itself]. So that was similar to me; I never learnt classical music.”

The mention of Pärt is important. The more popular end of modern instrumental music draws heavily from the kind of ethereal classical music that became increasingly popular in the 1990s and 2000s, first through Górecki’s Symphony No. 3, then Pärt’s later work. According to the classical music database Backtrack, his music has been performed in public more than any other living composer in the past seven years, and he has provided a route into instrumental music for artists as well as listeners.

Erased Tapes, an independent label based in east London, was founded by a German architect called Robert Raths in 2007, and has become the principal purveyor of this type of modern instrumental music, with Arnalds, Frahm, Lubomyr Melnyk and Penguin Cafe Orchestra among its artists. “Without Erased Tapes we would still be each in our own corners like we were at the beginning,” Arnalds says. What unites these artists, according to Raths, is “a certain atmosphere, a feeling. When everything out there is so noisy and flashy, and . . . everyone’s trying to sell you something, then you create an alternative to that.”

That soothing, softened approach — one might call it “slow music”, as in “slow food” — has caught the eyes of the major labels, too. Last year, Decca Classics set up its own label for this sort of thing, Mercury KX. “It’s certainly a growing business,” says Alexander Buhr, managing director of Decca Classics Music Group. “It’s also interesting to us because it comes with a slightly different audience. Classical music comes with a specific audience, but this comes with an audience who are really into electronic or dance music and also like Ólafur Arnalds or Max Richter.”

Buhr highlights the fact that many listeners come to the artists through their work for film and TV. “You have these entrance points where people are aware of the music and the sound, so once you can point them to the artist they can say, ‘Oh I know that, I like that, I’ve heard that before.’ ”

But there is another element at work: Spotify. This gentle, emotional music is perfect playlist fodder for those seeking background music. Raths scoffs at the notion that streaming has made a significant difference to his artists’ popularity — “You might have a huge peak because it features in Bathtub Hits 2017, but 90 per cent of those people don’t remember the name” — but it is clear that the music that engages the largest audience is the least formally challenging — not the less comforting work of more experimental composers.

Ólafur Arnalds on stage during Yellow Lounge, Berlin © Getty
“I think people think it’s quite trendy, and some of it’s quite easy to listen to,” says Eleanor Ward of Nonclassical, which releases what she calls “new classical experimental electronic music” and puts on small-scale events in east London. “I sometimes get bored with all of the arpeggiated piano music.”

On Spotify Max Richter has more than 4m monthly listeners and contemporary classical is big business. Ward draws my attention to an article in The Cusp in which Dominic Murcott, head of composition at Trinity Laban conservatoire in London, observes: “Suddenly we’ve got stacks of overtly pretty music being made. It’s a group of students who at the moment all seem to be erring much more towards the Spotify playlist version of contemporary classical. More will have ended up towards modernism [more dissonant, experimental writing] about 10 or 15 years ago.”

This colonisation of the mainstream shows no sign of slowing. Raths tells me that earlier this summer he was visited, for the first time, by the BBC radio playlisting team. While he says Erased Tapes had been supported by individual DJs, this was the first time the BBC as an institution had looked to support the label. He outlines what he believes to be its reasoning: “There are all these platforms online — Boiler Room, NTS — that are taking over, and if the BBC doesn’t do something to acknowledge this movement, then it will lose touch with that group of people.”

All of which makes it sound as if around the country there are groups of young men and women just waiting to storm the battlements, driven on not by fanfares, but by mournful piano music in the background. It’s a very gentle sort of revolution.

Ólafur Arnalds’ album ‘re:member’ is released on August 24 on Mercury KX. The Erased Tapes box set ‘1+1=X’ is out now. Nonclassical’s next event is on July 11 at The Victoria, London

This site uses Akismet to reduce spam. Learn how your comment data is processed.